Awarded to Lieutenant William Edwin Moon. British War Medal (LIEUT. W.E. MOON) Served with the Army Service Corps, joined as a Private later Acting Company Quarter Master Sergeant. This followed a officers commission with the Royal Garrison Artillery. Seeing action in Europe and on two separate occasions in Poland and Russia.William Edwin Moon was born in the parish of West Bromwich in the county of Warwickshire on the 18th May 1894. Attestation Papers records him as joining the Army Service Corps, serving in the Mechanical Transport Corps. Enlisting at Wells on the 6th May 1915. Promoted later to Sergeant in 1917 with VII Corps, A.S.C. This later followed by admission to the Royal Garrison Artillery. Served with the British Expeditionary Forces in Europe with the R.G.A. 10th April 1917. This followed a commission as 2nd Lieutenant with the R.G.A. Further on in the war he was promoted to full Lieutenant. Service papers suggest at some point in 1919 he was involved with the Military Mission to Poland. Documents also indicate involvement in conducting Haller’s Trains to Poland. Details are noted as Military Mission, 1919. Further records indicate the Moon is serving in Russia Theatre of Operation with the rank of 2nd Lieutenant followed by further promotion to Lieutenant. Records show he returned to England on the 25th July 1919. He was later demobilised to Special Reserve Office on 18th November 1919. Included with the British War Medal a medallion ‘For King and Country’ A.C.C. dated 1953. Named on reverse W.Moon. (with copy MIC, medal rolls and service papers) 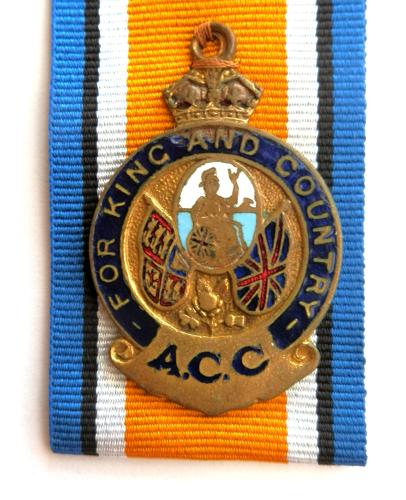 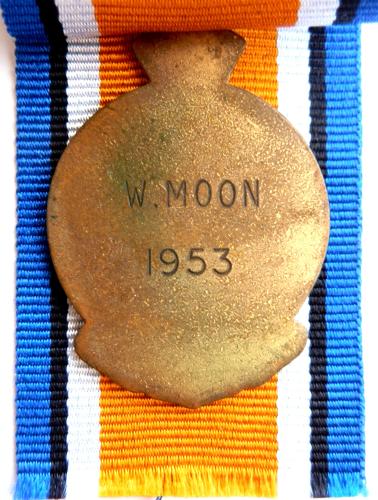